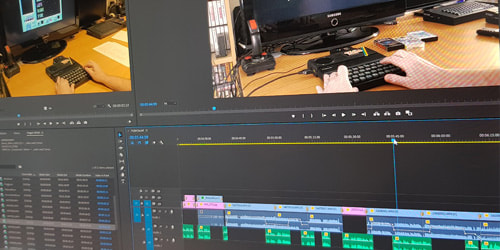 The Spectrum Show first appeared on Youtube on 21st April 2012 with the very first rough episode. It wasn’t even an episode, just a tester to brush up my video editing skills for a project at work. Once uploaded it seemed popular and as luck would have it, a friend of mine cleared out his loft and gave me a few Spectrum bits.

One of the items was the Rotronics Wafadrive, something that I never had back in the day, but always wanted to try out. This then became the second episode as I assumed other Spectrum fans may also be interested in that device.

From then on, the show has gone on and evolved into what it is today. The resolution has changed from a now tiny 720 x 576 (DVD format), through 720p and now to 1080p. The intro has changed as I grew more ambitious and learned new skills and the content has changed only slightly.

New episodes have gone out on a monthly basis apart from a few occasions where I took a month off after a series ended. There have been Christmas specials and the recent break out to Patreon, putting out around two or three additional videos per month on that platform.

​Check out my Patreon page here.

The show features a few things I am very proud of. I own all the games reviewed physically – on tape, and the hardware reviewed is real and not emulated. I own every bit of hardware shown too and test it out on real machines. Games are tested on real hardware using only emulators to capture footage for the show.

Information and Data comes from the numerous magazines I own. Reading these are the basis for all features in the show. Older episodes included a News section covering the news of the day and although I have a large collection of magazines, it is much more convenient to search through scanned pages. I prefer to look at weekly magazines such as Home Computing Weekly or Popular Computing Weekly, because of their regularity, tend to be quite accurate with dates.

The main feature, quite a lengthy but enjoyable task. If it’s a hardware review, I spend a good few days setting things up and generally playing about. Testing things out, making notes and often video. If I have hardware setup, I don’t want to do it all again to grab some footage later on, although this has been the case a few times.

Equipment
Cameras: I use a Canon 80D stills camera and a Panosonic HC-VX980 4k video camera.
Audio: I record on a Samsung Meteor microphone using Audacity software.
Editing: I use Adobe Premier Pro.
Each show takes between three to four weeks to produce.
Important note about YouTube (September 2021)
Over the last few months, Youtube are starting to force adverts into videos, even non-monetized ones like mine.
I do not monetize my work, I do not want adverts in my videos, but I have no say in the matter.
I apologise if you get adverts - but it is not me trying to force them onto you and I do not get any revenue from them.​ Youtube take 100%.
I suggest using an add-blocker.