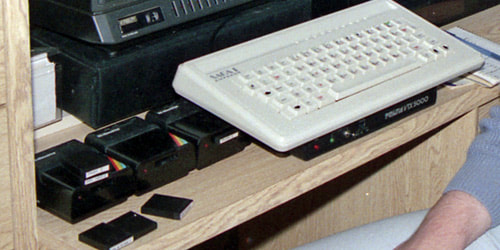 I have been involved with computers since 1981, when a tiny, sleek home micro (as they were called back then) called a Sinclair ZX81 arrived at my door, and I have been hooked ever since. Initially computers were a fascination and more than just something to play games on, although I did my fare share.

I was interested in how they worked, how to write my own programs and how to plug things into them that didn’t end in tiny wisps of white smoke. After the ZX81 came the momentous Sinclair ZX Spectrum. A beautiful, colour, rubber keyed dream that even had sound. This machine is solely responsible for the UK IT industry as it is today, and rightly holds a place in many people’s hearts.

I was one of the rare breed of people who bought a modem for the Spectrum and ran a viewdata bulletin board called ‘The Hole’ running at 1200/75 half baud on Micron software using a Prism VTX5000 modem.

My next computer was the wonderful Commodore Amiga A500. It was at this point I also left my mundane day job and took up an offer from a local one-man computer outfit to help him with the business. The business grew and soon expanded into large premises with more staff, eventually becoming a large retailer turning over millions a year.

I also kept up my communications, buying another modem and running my own Amiga BBS called Image Viewdata. Again running at 1200/75 using comms software called Ruby-Tel from Y2 computing.

I began to write software in the nineties. Nothing special; a few public domain games for the Amiga were about as good as it got, although I was threatened by Games Workshop once for using one of their images!

My Amiga was upgraded to a B2000 with 20mb Seagate hard drive, yes that’s megabyte and not gigabyte! Then came the A4000, a cracking machine that I wish I had never sold. Soon the PC’s, previously only a business computer, began to become cheaper and real contender for home use - the rest is history.