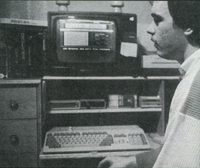 A while back, I put out a plea on the WOS forums for anyone who had a copy of a 1988 edition of  Popular Computing Weekly. I wanted this particular edition because I was featured in it, in a section about Bulletin Board Systems. Luckily, a very kind forum member (thanks Battle Bunny) had one he was prepared to separate with, and so today it arrived. Wow! What a trip down memory lane..

Below is the complete article from September 1st 1988. (well, the bits about me at least)...

Malcolm Arnold looks into the workings of two bulletin boards.

Last time around we talked about Bulletin Boards in general terms. Here's a more specific look at two BB sysops and their systems.

Paul Jenkinson operates the Image board from the comfortable inner sanctum of his house in Leeds. He started out in a small way, with a Sinclair Spectrum and Micron Software, but the limitations of this system - being both fairly slow to run and Spectrum specific - led him to dig deep in February of this year and buy his present set-up: an Amiga A500 with 1 meg upgrade and two drives, online through a Pace Linnet modem. Combined with Ruby-Tel software from Y2 - Paul reckons he's the only private sysop currently running this -the result is a professionally presented Viewdata board; but the hard and software are only part of the story. Anyone with the requisite bucks can get a system up and running; keeping it there - and keeping it interesting - demands personal commitment.

Paul said that he got this far because of what he calls his 'passion' for running a board. He emphasised that to run a good board you need to spend time. The system will run unsupervised, but he told me, "I'm here in front of the screen most evenings, keeping it up-to-date, so in a sense the board is being constantly updated." Sadly, not all sysops see this kind of service as compulsory (logging on to some BB's is like accessing a timevault kept prisoner in the cupboard under someone's stairs); but what he calls "a balanced service," is how Paul sees Image.

The board self-evidently sets out to be fun, with jokes, puzzles and humorous articles; but it also has its serious side. Information on the board includes software and hardware reviews, and a SIG (Special Interest Group) for Amiga owners. Paul recognises the need for coverage of other computers than the Amiga, and indeed there have been SIG's for others on Image, but presently he's looking for editors for those sections. Fancy the job, anyone?

But how does Paul get a return on his investment - after all, it cost him around £1,000 to set up. "Well," he replied, shaking his head sagely, "The only way to get a financial return is to charge a subscription for using the board, and there's no way I'm going to do that!" Why not? "I've seen what it's done to other boards. I'd rather have people using my system . . ."

Job satisfaction is the return that keeps Paul going, and the biggest buzz he can get is when users take the time and trouble to let him know they value Image.

Images they didn't use