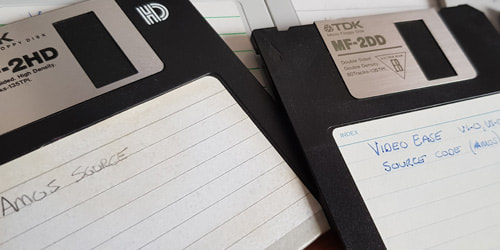 ​Introduction
Back in the mid-nineties my computer of choice was an Amiga. I had many models over the time period up to and including a wonderful Amiga 4000. It was this machine that I wrote my PD games on using AMOS Professional and its compiler. I started many games but only finished a few, those being Baldy, released in 1992, and Talisman also released in 1992. I did release a commercial video titling package called Video Ease in 1993 as well.

As many programmers tend to do, I had masses of un-finished ideas scattered around my hard drive, and in-frequently backed-up to whatever was available, usually floppy disks. The Amiga 4000 had a high density drive that could hold 1.7mb of data using its own proprietary format. When I sold my A4000, I kept a few disks with source code I thought worth saving, but had no idea why. I was moving to a PC which could not read Amiga formatted disks, but never the less, I kept about ten disks. These disks followed me through house moves, job changes and impending old age, sat in a small box mixed in with other items from my past.

With Amiga emulation now possible, and a curiosity about the actual contents, I recently wondered if I could get the data off the disks somehow. I do have an A600, but it does not power up, so that was a non-starter. After some searching, I found a method of transferring Amiga disks to emulator compatible ADF files using an old PC with two floppy drives. Luckily I had just bought one cheap from eBay and with the additional of a second drive, I was ready to start the experiment. The first few disks were extracted and even though I did not know the contents, I had some idea of what I hoped I would find when I eventually completed the task and loaded the disks into an emulator.

Hopes
I wanted the source code for Baldy, Talisman and Video Ease. I have printed out versions, but wanted the actual code. I was hoping for Video Ease version 1.1 – the updated and never released version, and also the updated Talisman. This was also never released but was created when Games Workshop threatened me with legal action.

I also had vague memories of a tank game and the spiritual successor to Baldy that had a working title of Baby. This game I remember had a few levels complete and I really wanted to see it again.

HD Problem
As I worked my way through the disks I came across a High Density one. This would, I hoped, hold a lot of source code. The problem was, it could not be read by the conversion utility, as that could only handle Double Density disks. Now I had a problem. Luckily, during the Replay Blackpool even in 2017, I had a chat with Dan Woods from The Retro Hour, who owns an Amiga 4000, and he agreed to rip the contents for me. With its speedy return, I set about exploring the disks.

Disk 1 – Baldy
No surprises here. The disk was clearly labelled and it contains the source code plus source graphics files for my 1993 PD game. It was good to see the code again, and now I have a digital copy of it.

Disk 2 – Video Ease (+ various version)
Again no surprises apart from the number of versions of my video titling package. I thought there was just version 1 and 2, but there seems to be 1, 1.a, 1.b, 1.c, 1.d and finally 1.1. The last version was supposed to be released but due to bad reviews, it was held back. The code actually runs and for the first time since 1992 I can see how version 1.1. looked. I knew it was far better functionality wise than the first release, but I had forgotten about the colour change.

Disk 3 – Amos Source
This disk contain a lot of source files for things I had forgotten I had created. Amongst the code were two version of an adventure game based on my Speccy game Brons Kingdom. Neither seemed to work as they required graphic files not present on the disk. The code only had one location and no parser!

There was also an education game called Junior Geography. I have absolutely no recollection of this. There was the very beginnings of a business program named Pay Ease. This seemed to be linked to Video Ease via the ‘ease’ bit, so maybe there was a plan to build off that. There is little code, but it is a program to calculate pay and tax.

There is the beginnings of some kind of encyclopaedia, a 3D maze game that again will not run without required graphic files, and a sex trivia quiz. Other files include Zap, Teletype and pic-cutter. I think Pic Cutter was a tool I wrote to help me cut out image files from IFF pictures and save them as AMOS icon files. Zap was just an empty file! Teletype was a test of how to get text displaying on screen like a teletype machine, one character at a time.

Disk 4 – Talisman and Tank
This disk, as you would expect, contains source code for Talisman and Tank. Talisman was my PD adventure, but this disk also contains the re-written version (named Truce Stone) that did not include the images taken from various Games Workshop magazines. This version was never released. The main screen is the same although he buttons now have textures and the images that caused the problem have been replaced. The dwarf is replaced by a woodsman, and the Orc remains, although it uses a different image.

Tank looks like rather a dull game to be honest and seemed to be a mixture of two ideas that never quite made it. The graphic files indicate a top down maze game, but when the source code was loaded and changed to allow it to run, the game was a side scrolling game.

Disk 7 – AMOS Source (HD)
Eventually, thanks to Dan, the contents of my high density disk arrive, and it contained the game I was looking for, Baby. Before we get to that though, it also contained a game named Craft. This was a version of my Spectrum game of the same name, and looked quite nice. It was a long way from completion, and the main sprite was not functional. There was a single screen and the player could only climb down (which caused graphic corruption due to poor clipping).
​This disk also contained a lovely little gem I had forgotten about... Teleflex.
Me and Teletext-like programs
Let me explain a little bit about why I created so many odd diary style programs based on Teletext. Teletext, if you are not familiar with the term, was a text-based service that standard televisions could receive with several TV stations having their own version. The BBC had Ceefax with commercial station like ITV in the UK had Oracle.

When Design Design released Dark Star for the Spectrum, it had another program on the cassette, Spectacle. This was a Teletex-like program that contained jokes, development stories and just little bits of random silliness the programmers added. I loved it, and from that day I always tried to make a similar thing for my old BASIC games. I made about 9 ro 10 of them, and they are still fun to read through.

When the Amiga came along the only one I did was called Teleflex, and was never actually released. I had forgotten about it until I got the disc back from Dan. This little collection of jokes, diary entries and comments covers the work done on the Baby game. It reports on how it was proceeding and how it eventually came to an end. It includes events that happened at work (a computer store in Harrogate), events from home life and just general chaos! There are 29 pages of sheer joy (at least for me) and again, it was great to grab a glass of wine and re live the moments documented on this little bit of code. At some point I may grab all the screens and add them as viewable images here.

Baby
Now onto Baby. This game was the spiritual successor to Baldy. The main character, a baby, has to collect gems from various screen – the general idea is now lost in time, but it was a simple platform game. The source code works fine, after a few changes to graphic locations, and the first six levels are fully playable. The game differs from Baldy because the player can actually jump properly rather than just moving between fixed platforms. I was quite pleased with this code, even though it wasn’t perfect.

There is no sound, and the gameplay needed a lot of tweaking, especially the platform detection. The game though, was as I remembered it, with a cute looking main sprite and dripping paint tins on later levels. The game stopped production on 7th April 1993 because I was having trouble with several aspects of the code and also at the time, other companies were releasing games with a baby as a main character. (BC Kid, Chuck Rock Jnr etc..)

It is great top finally get these disks archived again, and to read through the files examining what I was trying to do and to try and get them running again. The teletext program is especially good and gave me a few laughs as the memories came flooding back.

I have to give Dan Woods massive thanks for getting the files off the disk, and for letting me take a stroll through my coding past.the third disk, so this is lost forever, whatever it was. I presume it was a backup of my DH0 partition.