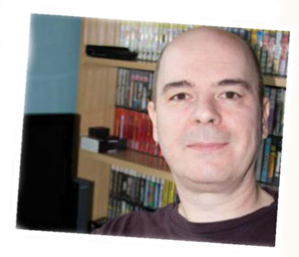 Paul Jenkinson is, among other things, the man behind the recent Kyd Cadet 3 and other impressive ZX Spectrum games. So we borrowed him for a while to chat about creating his Arcade Games Designer-based titles.

Hi Paul. How did you go about designing the Kyd Cadet games?
The first game came about by accident. I was trying to draw a recognisable sprite and no matter how I tried, I couldn’t draw a good face. I stuck a helmet on there almost out of frustration and suddenly there was this spaceman.

Obviously there were a lot of games that featured spacemen – Jetpac is a good example – so I wanted something a little different, and that’s when the idea of a boy came to mind, a space cadet.

From there it was a case of creating the world, and right from the start I knew I wanted to make a believable, joined-up game map, so scenery from area would bleed into the next. Part of the fun for me is seeing how the environments change and how the player can find themselves in a strange new place without realising they have already travelled through the previous four! Until you actually look at the game map in full, you don’t realise how it all fits together.

And what cased the change of style for the third instalment?
It was a comment on World Of Spectrum forums. Not about my games, luckily, but someone posted a quite innocent comment along the lines of “I’d like to see an AGD game that isn’t platform based”. I was also trying to come up with an idea for another game at the time and knew I wanted to do some kind of shooting game. I wanted to do something that encompassed what I think I do well (platform games) but with new elements.

How long does a game like Kyd cadet take to make?
If I had nothing else to do, and could concentrate on just making a game, I think I could have completed Kyd Cadet 3 in about a month, maybe less. ACG is brilliant, you can create the thing in your mind and get it on screen very quickly. Typically though, life gets in the way, so games can take anything from three to six months.

Does Arcade Games Designer shape the games made with it?
Good question. For people that are not prepared to put effort into their games the answer is yes. It is so easy, with a few hours work, to produce a below-average game that adheres to the basic rules and automatic parameters of AGD that anyone can create a game. My tutorial videos cover most of the basics anyone would need to make a Manic Miner clone in just four hours.

The challenge is to make AGD do what it wasn’t meant to. For example, there is the Custom Block, a simple 8x8 pixel block that with a few lines of code can trigger an event when the player or other sprites collide with it. The trick is to think what that event could be. Could it be to suddenly flip to the top of the screen, to teleport to another area, to take on a superpower, to grab a rope… and this is where new game ideas are born.

What feedback have you received from the Spectrum community?
The vast majority is very good, and thankfully only a few bugs. The games I make do not make money and are free to download, and they are done for my own enjoyment. I see it as a challenge, trying new things with AGD, and there are updates to the engine all the time. If other people like them, that’s great.

And finally, what can we see from you in the future?
I have a new version of Kyd cadet 3, a sort of version 1.1, nearly ready, with new screens and little bug fix. Unluckily time is precious at the moment, so I am struggling to fit it in. Apart from that, I am always working on new game ideas and, to be honest, I have no idea which of the ten or so games will make it past the test stage.